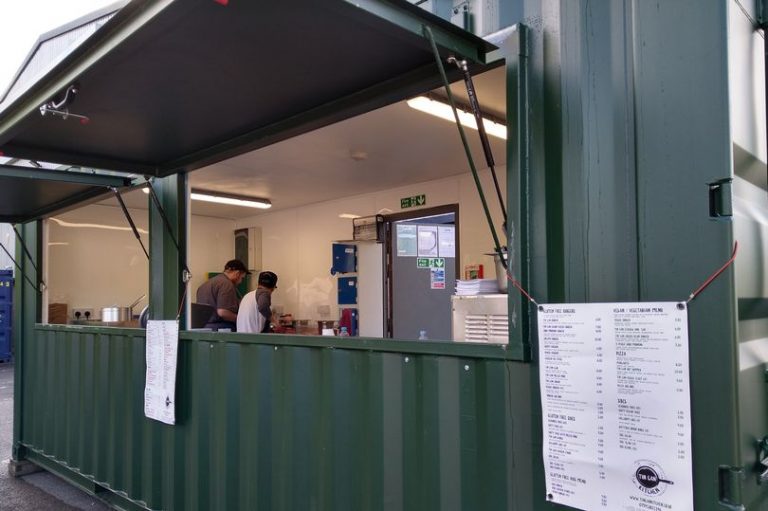 Lockdown has been tough for a lot of industries. And one that has been particularly hard hit is the local music scene.

These musicians could be doubly hit as the bars and venues they usually play at will be closed, and many of them have day jobs in the hospitality industry – which has also seen people out of work.

However, some musicians, well-known to the Newport scene, have set up a takeaway food business during the lockdown – operating out of a shipping container.

Tin Can Kitchen, operating out of the car park near What! in Rogerstone, is selling street food such as burgers and pizzas and they’ve already gone down a storm.

The plans were in place before lockdown began but the small new business has been a lifeline for a number of the city’s performers.

In fact the plan for the completed projected sounded impressive – and they’re hoping to still conclude them once lockdown is over.

The goal is to combine amazing street food with music. And it helps that all the staff are well known on the music scene in the area, with names like Jon Lillygreen, Bongo Peet and head chef Barry Fallon all involved.

At the moment, there’s one shipping container, selling a street food menu, but eventually there’ll be four containers, selling a wide variety of cuisines, lined up to make a courtyard, where people can eat, drink and watch live music.

And it looks like that dream is likely to become a reality, given the reaction they’ve had from customers.

A spokesman for Tin Can Kitchen said: “We had initial projections for three months and we smashed them within the first couple of weeks.

“The demand for burgers and pizzas has been phenomenal.

“The original idea for Tin Can Kitchen is to have an outdoor street food court, music venue and bar.
“Obviously we’ve had to pivot because of Covid-19, which is why we’ve opened the delivery service from the shipping container. We’ve got more containers on the way and it looks like the music venue and food court will come to fruition sooner than we’d hoped.

He added: “There’s definitely a link between musicians and what we do. Some of the people we work with are really entrenched in the Newport food scene as well as the music scene.

Bongo Peet for example is prolific in Newport, Barry has been in multiple bands and toured the UK and been in bands with our sous chef, Jackie. Jon Lillygreen and Genevieve Gyseman, delivery drivers, they’re all musicians. Jon for example runs the Brotherhood, a travelling band for events and weddings and Genevieve runs events in Porters, Cardiff. There’s a huge music link.
“It’s in the DNA of the business.”

Tin Can Kitchen© All Rights Reserved 2020